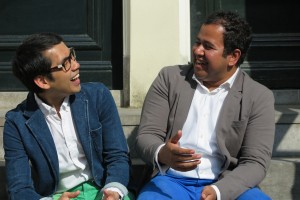 na and Felix Justin came from different parts of Indonesia, and they just met in the Netherlands when pursuing their education in 2012. They are studying in different conservatories, but they live together in the same city and have been housemates for more than three years. Satriya was born in Bandung, Indonesia, and since 2012 has been enhancing his abilities in singing through the education offered at the Conservatory of Amsterdam, under the tutelage of Henny Diemer.

Felix was born in Surabaya, Indonesia. Because of his curiosity in learning music and his dream to become a professional musician, Felix continues his journey to study music further in Netherlands under the tutelage of Henry Kelder. They had their first public performance with Studio 32 in Vredenburg Leeuwenberg, Utrecht, The Netherlands. During those times, they participated as a duo with many experts in Art songs, for instance, Rudolf Jansen, Jan-Paul Grijpink, and Maurice Lammerts van Bueren. They started three years ago, and have broadened their repertoire into art songs and opera arias. Since they will finish their study soon, they are concentrating on making a professional duo ensemble as their first motivation. Recently, this duo just won the third prize, audience prize, and student jury’s prize in the International Student Lied Duo Competition 2017. This achievement brings them automatically to the semi-finals round in the International Voice Competition s’Hertogenbosch 2019.

No gigs are currently scheduled.